You are here: Home / Blog / American Citizen Arrested for Acting as an Illegal Foreign Agent of the People’s Republic of China 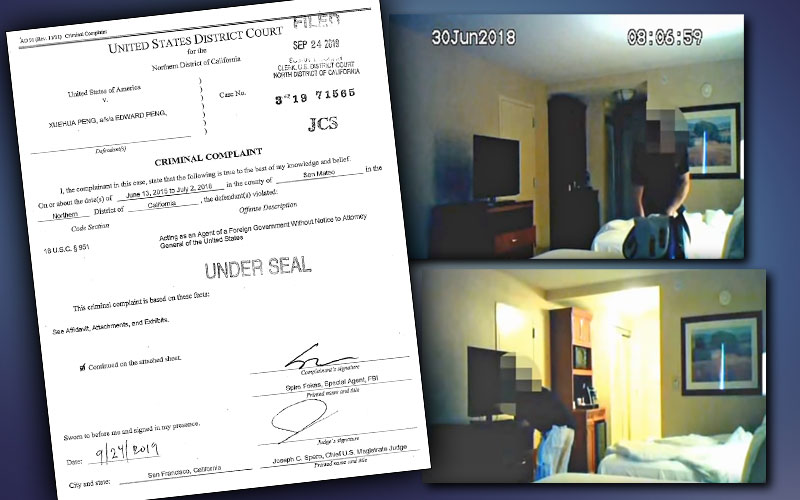 This arrest highlights an interesting look at Chinese espionage tradecraft:

“According to the allegations, Peng conducted numerous dead drops here in the United States on behalf of Chinese intelligence officers and delivered classified information to them in China.  His arrest exposes and disrupts an operation by those Chinese intelligence officers to collect such information without having to step foot in this country. Coming on top of our many recent Chinese espionage cases—involving both national defense and intellectual property information—this case illustrates the seriousness of Chinese espionage efforts and the determination of the United States to thwart them.” —Assistant Attorney General of National Security John C. Demers

“The conduct charged in this case alleges a combination of age-old spycraft and modern technology. Defendant Xuehua (Edward) Peng is charged with executing dead drops, delivering payments, and personally carrying to Beijing, China, secure digital cards containing classified information related to the national security of the United States.”  U.S. Attorney Anderson further stated, “The charges announced today provide a rare glimpse into the secret efforts of the People’s Republic of China to obtain classified national security information from the United States and the battle being waged by our intelligence and law-enforcement communities to protect our people, our ideas, and our national defense.”—U.S. Attorney David L. Anderson for the Northern District of California

“The FBI, along with our partners, will aggressively pursue foreign agents operating illegally in the United States attempting to steal our country’s most sensitive information. This case should serve as a warning to the government of China as well as any other foreign adversary looking to replicate this activity. The FBI, and our intelligence and law enforcement partners, will not waiver.  We will bring all of our resources to bear to defeat hostile foreign intelligence services and protect our nation’s security. I would like to thank FBI counterintelligence personnel throughout the country who tirelessly worked this investigation over the course of many years, particularly those personnel in our Counterintelligence and San Francisco Divisions.” —Assistant Director John Brown of the Counterintelligence Division

“Putting an end to Mr. Peng’s alleged actions are an important and significant step in dismantling the PRC’s overall efforts against our country. Our message is clear: the FBI, along with our intelligence community partners, will pursue foreign adversaries -at any level of an operation- and disrupt their malicious activity when it is detected.”—Special Agent in Charge Bennett of the FBI San Francisco Division

According to the complaint filed Sept. 24, 2019, and unsealed this morning, Peng, 56, a U.S. citizen living in Hayward, California, acted at the direction and under the control of MSS officials in China in retrieving classified information passed to him by a confidential human source (the source), leaving money behind for the source, or both.  His activities included one dry run and at least five successful “dead drops” between October 2015 and July 2018.  The dead drops occurred in the Bay Area and in Columbus, Georgia.

In the June 23, 2015, “dry run,” no information or money was exchanged.  Instead, an empty package was left by the source for Peng at the front desk of a hotel, and Peng later retrieved it.  In the first successful dead drop, Peng retrieved a package containing an SD card from the front desk of a hotel.  In each of the other four successful dead drops, Peng booked hotel rooms and left a room key to be picked up by the source.  Peng then left envelopes of cash in the room, retrieved a secure digital card left there by the source, or both.

In each instance in which he retrieved an SD card from the hotel room, Peng then traveled to Beijing, China, shortly thereafter.  The complaint further alleges that Peng was told by an MSS handler, in coded language, where and when to conduct the dead drops, how much money to leave in exchange for the SD cards, and when to return to China to deliver them.  As alleged in the Complaint, the FBI secretly filmed Peng conducting some of the dead drops, and intercepted Peng’s telephone conversations with his MSS handlers in China.

On Friday, Sept. 27, 2019, Peng was arrested at his residence in Hayward and made his initial appearance in federal court in San Francisco before U.S. Magistrate Judge Joseph C. Spero. Magistrate Judge Spero ordered Peng held without bond pending further proceedings. Peng’s next hearing has been scheduled for Oct. 2, 2019, at 10:30 am before the Honorable Jacqueline Corley, 450 Golden Gate Ave., 15th Floor, for a detention hearing and identification of counsel.

A complaint merely alleges that crimes have been committed, and all defendants are presumed innocent until proven guilty beyond a reasonable doubt. If convicted, Peng faces a maximum sentence of 10 years, and a fine of $250,000 for acting as an agent of a foreign government without notifying the United States Attorney General in violation of 18 U.S.C. §  951.  However, any sentence following conviction would be imposed by the court after consideration of the U.S. Sentencing Guidelines and the federal statute governing the imposition of a sentence, 18 U.S.C. § 3553.

This case is being prosecuted by the Special Prosecutions Section of the United States Attorney’s Office for the Northern District of California and the Counterintelligence and Export Control Section of the Department of Justice, National Security Division.  The prosecution is the result of an investigation by the FBI.