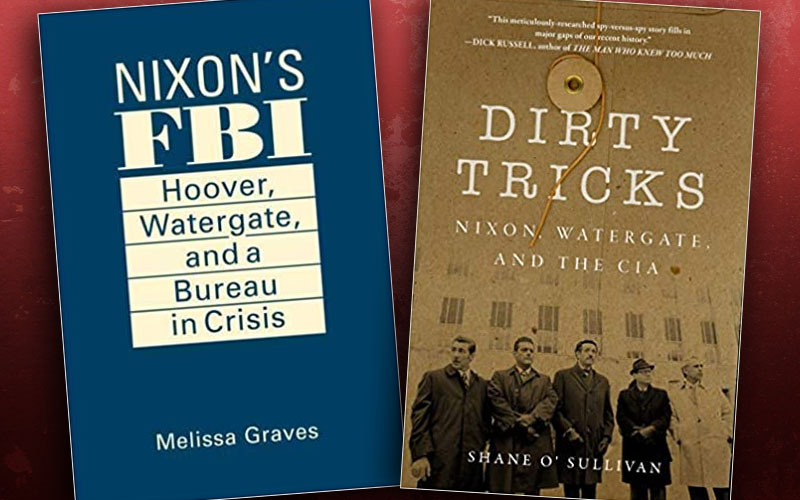 My reviews of these two books:

“Oh, what a tangled web we weave/When first we practice to deceive.” This now famous line from the epic poem, Marmion: A Tale of Flodden Field, written by Sir Walter Scott in 1806, is set in sixteenth-century England during the reign of Henry VIII. The fictional tale recounts the intrigues of Lord Marmion, one of Henry’s favorites, who schemes, together with Constance, a dishonest nun (and Marmion’s mistress), against Sir Ralph De Wilton. Marmion’s goal is to gain the hand of Clara de Clare, a woman of wealth, and Wilton’s fiancée. As for Constance, her only wish is to restore favor with Marmion. Scott offers readers a host of villains and heroes woven into a classic study of betrayal, deception, duplicity, and cover-up—all of which spell doom in the end for Marmion and victory for Wilton. The themes that Scott lays out in his poem are on full display in two recently published books that take the reader back nearly half a century to 1972 America, an election year.

It was also a year when a botched second-rate burglary led to the end of Richard Nixon’s presidency two years later. The first is a thin volume, Nixon’s FBI: Hoover, Watergate and a Bureau in Crisis, by Dr. Melissa Graves, while the second, much larger study, Dirty Tricks: Nixon, Watergate, and the CIA, was written by Shane O’Sullivan. These authors look at the same subject from different angles. One is academic and informational; the other is more provocative, investigative, journalistic, and muck-raking in style. One has a tone of heroes searching for answers amid lies, shadows, political pressure, and cover-ups; while the other seeks out hidden villains who appear to be driving the action.

INTRIGUES AND OTHER “GRAY” STORIES

Nixon’s FBI examines the historically complex and often fraught relationship between the White House and the Federal Bureau of Investigation (FBI). Graves contends that unlike its Intelligence Community partners, the absence of a charter leaves the FBI vulnerable to the whims and instincts of the president. She points to President Nixon’s tenure as a “pivotal moment” when the FBI became too exposed to White House manipulation. Graves shines an interesting light on FBI Director J. Edgar Hoover, by carefully tracing the last three years of his life. She illuminates the huge challenges that Hoover confronted in the face of the growing nationwide disillusionment over the Vietnam War with its relentless antiwar agitation and escalating racial violence.

It was a new age. The old ways of doing things were no longer acceptable. Change was accelerating, and Hoover knew it. While confronting pressure for action from the Oval Office and within his own organization, he recognized that the questionable and often illegal tactics (such as surreptitious searches, warrantless wiretaps) employed for decades in the pursuit of intelligence were coming to an end. After half a century of doing Nixon’s bidding, a distrustful Hoover now quietly challenged an increasingly frustrated president who began scheming to replace him with someone more pliant and willing to follow White House orders.

Hoover first revealed his new attitude in 1970 with the White House formulation of the so-called Huston Plan.1 Nixon was convinced, as was Hoover, that the Black Panther Party was receiving foreign funding and demanded that the FBI confirm it. When Hoover came back with no such evidence, the Huston Plan was concocted in great secrecy. The plan abruptly folded after just five days when Hoover refused to cooperate.

Two years later, Hoover received unexpected support for his growing conservatism. In a case involving the bombing of a CIA recruiting office, a judge ruled that any government search of a premises, regardless of purpose, must be based on a court-ordered warrant in compliance with the Fourth Amendment of the Constitution. Graves calls the decision a major shift for the FBI that suddenly gave them cover but in effect increased tensions between Hoover and Nixon.

Fate dealt Nixon a temporary advantage in May 1972, when Hoover died and was replaced by Nixon loyalist L. Patrick Gray. Barely a month later, the White House–backed burglary ring—the “Plumbers”—were arrested in the middle of the night while rummaging through the headquarters of the Democratic Party in the Watergate office complex.

Graves carefully crafts the story of Gray’s brief and tempestuous tenure as a Shakespearean character lacking any idea that he got the job because of his blind loyalty to the president. While dealing with Gray’s tragic odyssey, Graves analyzes the FBI’s ongoing struggle to find the truth behind the Watergate break-in amid so many obstructions.

She probes the work of a person she clearly admires—Special Agent Angelo Lano. As the FBI’s Watergate case agent, his was an often difficult cat and mouse mission—exposing both lying politicians and government officials, persuading frightened witnesses to talk in the face of White House revenge, Gray keeping the White House updated on Lano’s progress, internal FBI pressures, and daily leaks to the Washington Post from Mark Felt, the FBI’s number two official. In the end, she writes, the “Bureau’s Watergate investigation prevailed and flourished. The agents on the ground working the case evinced loyalty only to the rule of law, and that fact—in and of itself—saved the investigation.”

Dirty Tricks, by Shane O’Sullivan, an Irish writer and filmmaker based in London, draws its title from the much publicized political skullduggery that surrounded the 1968 presidential election campaign pitting Vice President Hubert Humphrey against Richard Nixon.2 The book recounts events surrounding White House efforts to smear the reputation of Dr. Daniel Ellsberg and later the illegal attempt to collect intelligence on the Democratic Party in the months before the November 1972 elections. So shocked was Ellsberg at his findings vis-à-vis the classified history of the Vietnam War, that he risked prosecution and imprisonment by leaking the document to the New York Times in the hope of swaying public opinion.

Citing new evidence, O’Sullivan reexamines the conventional White House inspired and financed crime narrative of the Watergate break-in. He contends that the CIA was deeply involved and played a far greater role in these conspiracies than had been previously understood. For evidence, he cites the CIA medical staff conducting a psychological analysis of Daniel Ellsberg and technical experts helping in the burglary by supplying false identification, disguises, and special cameras.

Then there are the Watergate burglars, all of whom had ties to the CIA, including James McCord, a retired CIA officer. Going beyond Nixon’s inner circle, O’Sullivan reconstructs details of the burglars’ CIA connections, CIA actions taken after the arrests, and their individual perspectives on the purpose of the break-in and why they got caught.

Graves’ and O’Sullivan’s books are valuable additions to the libraries of intelligence practitioners and scholars, and U.S. history enthusiasts, for several reasons. First, both authors use impressive sources. Graves uses a vast array of primary sources, including numerous government materials, such as the Senate and House Watergate hearing records, and FBI files, to name just a couple. She also took firsthand accounts of the investigation from Angelo Lano and two other key figures in the investigation, Special Agents Dan Mahan and Paul Magallenes.

Similarly, O’Sullivan’s remarkable catalog of primary and secondary sources, which goes on for many pages, includes newly released official papers of Senator Howard Baker, the Tennessee senator who served as vice-chairman of the Watergate committee and its minority counsel, Howard Liebengood, to name a few. O’Sullivan also uses a large tranche of documents released by the CIA to the National Archives and Records Administration in January 2017, as part of its CREST online database that includes new and previously redacted material on the John F. Kennedy assassination and the Watergate break-in.

There is also the declassified CIA internal history of the Watergate case and other Agency files. Second, both volumes provide an invaluable contribution to the literature that addresses intelligence–policy relationships. Nixon’s FBI is a well-researched work filled with sobering insights delivered in a spare style that makes for easy reading. And in 2020, a truly unusual election year, when our government and American institutions are seemingly under constant attack, Graves offers important lessons about the consequences of the use and abuse of presidential power.

Dirty Tricks is an intriguing study with some new and interesting insights that offer the reader help in the effort to better understand the past and this most critical moment in the history of our nation. Indeed, history matters for the informed citizen and, as such, one can never know enough about the circumstances surrounding the Watergate crisis and the lessons it teaches. From these perspectives, Graves’ Nixon’s FBI and O’Sullivan’s Dirty Tricks not only enrich the existing scholarly works on the FBI, but also complement each other well.

No book is beyond critique, however—not even Nixon’s FBI and Dirty Tricks. A criticism of Nixon’s FBI is Graves’ concentration strictly on the perspectives of Lano, Mahan, and Magallanes. Perhaps she could have strengthened her thesis by speaking with some key FBI officials like John McDermott, Lano’s boss during the investigation, who had his own struggle with the White House and Secret Service about making witnesses available for interview.

Similarly, despite all Dirty Tricks’ impressive documentation, there remain—oddly—a few interesting omissions. For example, there is no evidence that O’Sullivan sought firsthand opinions and thoughts of the front-line investigators of the case. The perspectives of FBI case agent Angelo Lano are addressed, but only from his oral history given in 2008. Other FBI agents involved in the investigation from its earliest days, such as Dan Mahan and Paul Magallanes, are not mentioned. Also overlooked is Earl Silbert, the assistant U.S. attorney who prosecuted the five burglars.

Finally, while O’Sullivan’s investigative zeal is laudable, his many unnecessary details and tangents are often confusing and extraneous. The book, 536 pages in length, could have benefitted from a sharper editing pencil. Despite this criticism, Graves’ and O’Sullivan’s volumes are a necessary reference for intelligence history aficionados—professionals and academics alike.

1 Huston Plan was designed as a partnership of the Central Intelligence Agency (CIA), Defense Intelligence Agency, and the National Security Agency, together with the FBI, in a united effort to collect and analyze intelligence on extremist groups, even if doing so meant authorizing illegal activities.

2 The phrase later appears in one of the secret Oval Office tapes that recorded Nixon aide, John Erlichman, in conversation with the president referring to Daniel Ellsberg (an analyst with the RAND Corporation, who was part of a team commissioned by the Department of Defense to produce a classified history of the Vietnam War using top secret government documents) and the “dirty tricks [emphasis added] business in getting stuff out. …”

Dr. Raymond J. Batvinis retired from the Federal Bureau of Investigation (FBI) after a 25-year career. He has served as a teaching consultant for the FBI, Central Intelligence Agency, and other Intelligence Community agencies. The author maintains the website fbistudies.com.

This review was first published in the April 2021 issue of International Journal of Intelligence and CounterIntelligence.