You are here: Home / Blog / Le Carre’isms for Counterintelligence and Intelligence Practitioners 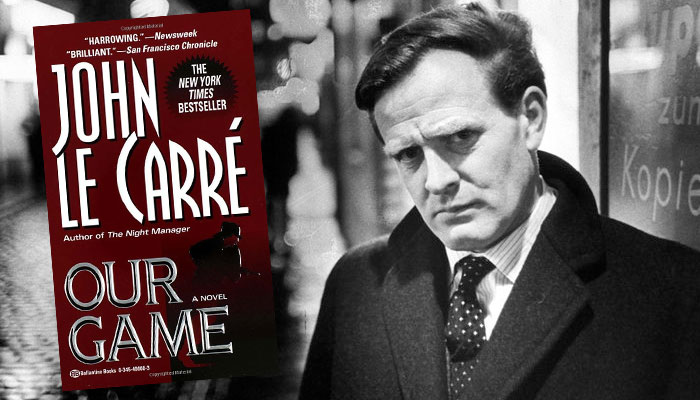 Over the recent Memorial Day weekend my wife and I took a breather to Ocean City, Maryland for some getaway time. Our plan was to ease back on our beach chairs strategically placed at a favorite shoreline spot and soak up some pre-summer sun.

Mother Nature, spiteful cuss that she is, had other ideas. Yes, it rained for the entire four days of our “getaway.” And yes, the only things that got soaked were our shoes as we ran between condo, car and store for the occasional errand.

But take heart. For what the washed out weekend did allow me was ample time to reacquaint myself with John Le Carre’, the iconic British mystery writer who, after more than half a century, still commands the title of master of the spy genre.

The book is Our Game published in 1995 by Alfred A. Knopf, Inc. Le Carre’s protagonist is Tim Cranmer, a veteran British intelligence officer forced into premature retirement by anonymous bosses at the “Office.”

The Cold War is over, the Soviet Union suddenly a relic; Boris Yeltsin, a former Communist Party apparatchik turned clownish reformer now leads a new Russia relegating the likes of Cranmer to relics as well in a new world facing the rising tide of terrorism.

No worries. Tim has money and a huge country home courtesy of a generous gift from a late uncle. His plan is to produce wine from grapes grown on the estate.

He also has Emma, a gorgeous housemate and pianist half his age whose only roles in life are keeping Tim happy while composing weird new age music.

Then there is Tim’s old pal – the free spirited, always outrageous and unpredictable, Larry Petifer. Both had been prep-school class-mates decades earlier at Winchester and later moved on to Oxford. When Tim joined MI6 he recruited Larry as a source and over the years successfully ran him as a double agent against the KGB.

I won’t give away the rest of the story but suffice it to say that Tim has problems. Lecherous Larry disappears with Emma, Britain’s Special Branch suspects clueless Tim of murdering Larry (which Tim also suspects!!) and masterminding the theft of thirty million dollars from the Russian government (along with Emma and Larry).

His old bosses at the Office threaten him with dire consequences if he reveals anything to the police about his past dealings with Larry. And now Tim, himself a fugitive, sets off on a hair-raising odyssey across Britain to France then Moscow via Berlin and into the Greater Caucasus mountain tribal lands of Ingushetia and Ossetia in search of answers. Oh, did I mention Tim’s discovery of three corpses in a barn with their throats slit.

A great Le Carre’ yarn for a rainy weekend.

Like I always do when reading good mystery fiction (Remember Sherlock’s principles) I keep pencil in hand to record author observations that educators, counterintelligence and intelligence practitioners, and general readers might find useful. Maybe even humorous.

Well, here they are. Enjoy!

Two golden rules when being interrogated:

“It would be quite wrong to suppose that merely because the right hand is bestowing consolation the left is not considering covert action of its own.” (44)

“Wait for the next act, instead of ditching him and then trying to catch up when it is too late, which is what we usually do.” (61)

“To kill without being killed is an illusion.” (89)

The way with double agents the world over:

In the world of intelligence nothing exists without context.” (97)

“Knowledge never kills but ignorance can.” (101)

“When you are accused of monstrous things nothing is sounds more feeble as the truth.” (141)

“The man who believes in nothing and therefore has space for everything has a terrible advantage over us.” (179)

“It is the provoker and negative instigator; as the essential bigot who by his intolerance brings about the circumstances he most deplores.” (187)

“The golden rule of disguises is to use as little of it as possible.” (237)

“When you are dealing with official minds if you can’t be humble, then at least be clean.” (237)

“We humans are dangerous weapons. And most dangerous when we are weak. We know so much about the power of others. So little about our own.” (243)

“In one night you sleep with every woman you’ve known and when you wake its still night and you’re still shivering alone.” (263)

“The greatest freedom in the world is to have no control over one’s destiny.” (267)

“A dead man is the worst enemy alive. You can’t alter his power over you. You can’t alter what you love or owe. And it’s too late to ask him for absolution. He has beaten you all the way up.” (299)