You are here: Home / Blog / The Manhunt and Capture of Vincent Loonsfoot in the North Woods of Michigan 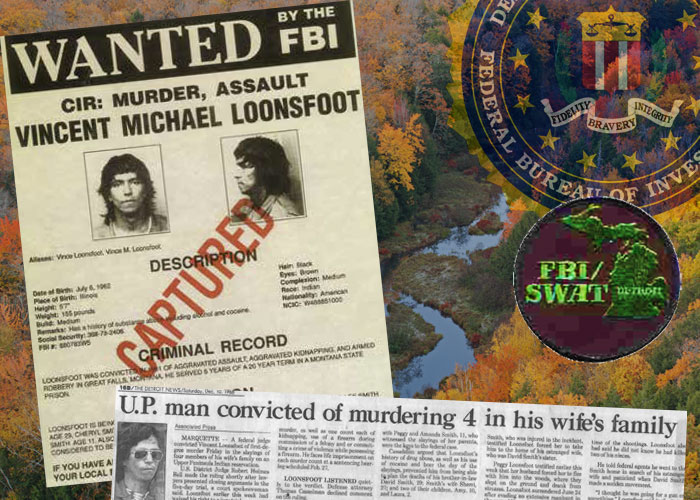 This FBI history article appeared in the July 2017 issues of The Grapevine, published by the Society of Former Special Agents of the FBI. The article was written by by Greg Stejskal (FBI 1975-2006)

3:10 To Marquette: The Manhunt and Capture of Vincent Loonsfoot in the North Woods of Michigan (pdf)

In the summer of 1988, Vincent Loonsfoot, an American Indian, drove to the Hannahville Potawatomi Reservation near Escanaba, MI. There, he ambushed and shot to death four members of his wife’s family and kidnapped his estranged wife, Peggy. Loonsfoot then set off into
the woods — beginning a highly publicized manhunt through the almost impenetrable forest of Michigan’s Upper Peninsula (U.P.).

Vincent Loonsfoot and his wife, Peggy, were living near Baraga on the Keweenaw Bay Reservation. An Ojibwa Indian Tribal Court awarded Peggy sole custody of the Loonsfoot’s two-year-old daughter, based on a finding that Loonsfoot had repeatedly physically abused Peggy. Without telling him, Peggy took their daughter and moved to Escanaba on the south/Lake Michigan side of the U.P.

Loonsfoot followed her, but not being certain where she was staying, he staked out her brother, David Smith’s, home on the Hannahville Reservation near Escanaba. While waiting for Smith and his family to return, Loonsfoot used cocaine and drank beer. It’s not clear if Loonsfoot had a plan, but when the Smith family came home, he ambushed them. Loonsfoot shot and killed David, his wife and two of their daughters. He wounded a third daughter, Amanda, age 11.

Driving the Smith’s car, Loonsfoot then forced Amanda to take him to the home where Peggy (Amanda’s aunt) was staying. There, Loonsfoot kidnapped Peggy, leaving Amanda. (Amanda would recover from her wounds.) Loonsfoot drove to a ski area outside of Escanaba where the car stalled. Then Loonsfoot set off into the woods with Peggy, who was barefoot and three months pregnant. He had no provisions, and only the clothes they were wearing. He did have a .30 caliber lever-action rifle and some knives.

Because the murders had occurred on an Indian Reservation, the crimes fell under federal jurisdiction. The Marquette FBI Office was notified. (Marquette is the largest city in the U.P. and is on Lake Superior.) When the Marquette FBI Agents were able to assess the situation, they called the main Michigan FBI Office in Detroit. It was decided that the FBI SWAT team would be dispatched to the U.P. to conduct the search for Loonsfoot and Peggy. . . .  (read the rest)