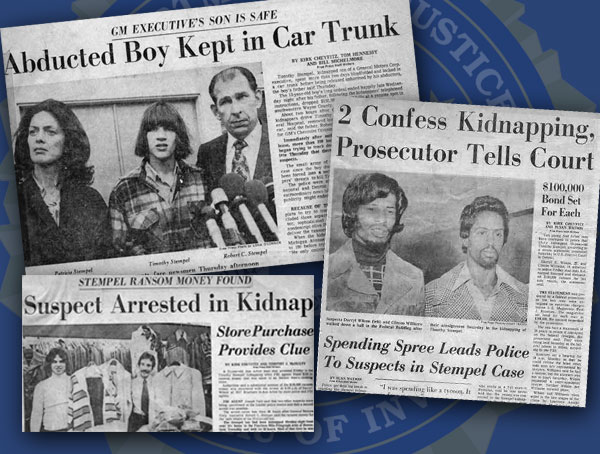 This FBI history article appeared in the March 2017 issues of The Grapevine, published by the Society of Former Special Agents of the FBI. The article was written by Greg Stejskal (FBI: 1975-2006).

I was assigned to the FBI surveillance squad. It was very cold in the back of the van. We hadn’t yet installed a heater that would work when the van wasn’t running.

I had been driven to a spot where I could observe the ransom drop site from the small one-way window in the back of the panel van. The driver had parked the van and left. He was picked up a few blocks away by one of the other surveillance cars. If anyone was watching, they would think the van was empty.

Kidnappings. It was one of many I would work in my career as an FBI Agent. As I would witness, time and again, it was a lousy way for criminals to make money. Particularly as technology improved, it became clear: the business model simply didn’t work. And I thought it was worth recounting why.

In this 1980 case, my job was to watch the ransom package, which had been placed between the rear wall of a party store and a dumpster. The package contained $50,000. The “party store” (that’s what they call convenience stores in Detroit) was at the corner of Fenkell and Robeson on Detroit’s northwest side.

The whole thing had started when Jacqueline Hempstead, the manager of a Detroit bank branch, learned that her son, Hessley, age 8, had been kidnapped on his way to school. She was called by the kidnappers and received instructions and a ransom demand. Mrs. Hempstead contacted her bank’s security officer, who alerted the Detroit Police Department (DPD) and the FBI.

It was decided that Mrs. Hempstead would follow the kidnappers’ instructions and comply with the ransom demand. A package with $50,000 and the aforementioned transmitter was prepared. . . . (read the rest)