You are here: Home / Blog / A Tale of Two Men: A Russian Spy and an FBI Special Agent 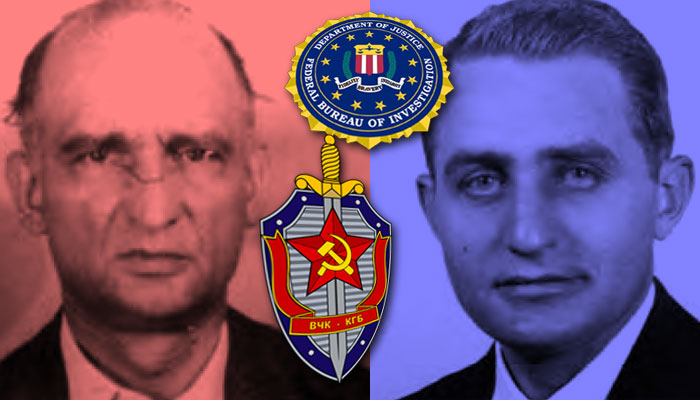 I wrote this FBI history article about the lives of Willy Fisher (above left), aka Rudolph Abel, and FBI Special Agent Paul Blasco (above right) and when their lives intersected on  21 June 1957.

This article appeared in the June 2017 issues of The Grapevine, published by the Society of Former Special Agents of the FBI.

What follows is a story of two men. One an American and the other English.

One the hunter; the other relying on deception for survival.

Both of them worlds apart in distance and background, yet moving through time along strangely parallel lines.

Their fate was to meet one blistering hot morning in a drab New York City hotel room 60 years ago this month. It would be a history-making encounter.

Our tale begins on July 11, 1903 with the birth of William August Fisher, or “Willy” as the family called him, in a row-house at 140 Clara Street in England’s northeast industrial city of Newcastle Upon Tyne. His 29-year-old German father, a shipyard worker named Heinrich Mathau Fisher, had fled from Russia to England in 1901 following five years of internal exile for fomenting revolution against the czar.

Heinrich may have exchanged Russia’s political turmoil for more peaceful climes but his revolutionary zeal remained firmly intact. Despite a good job, a decent salary and a settled family life, radical politics were never far from his thoughts. From the moment he arrived in England, he resumed his war against the czar’s suppression of his political opponents.

Beginning with trade union agitation and distribution of radical literature to Russian ship crewmen visiting Newcastle, Heinrich moved to smuggling weapons and explosives to Marxist revolutionaries in Russia. By the summer of 1921, with Lenin firmly entrenched in the Kremlin, the Fisher family returned to the country from which Heinrich had fled 20 years earlier.

As Willy, now 17, settled into Moscow’s routine, halfway across the world in Harrisburg, PA, Andy and Mary Blasco awaited the birth of their eighth child. Both were Slovak, born in Austria – Hungary. They arrived in America before the turn of the century along with millions of other East Europeans to feed the Industrial Revolution’s hunger for unskilled labor. On June 2, 1921 the couple welcomed their eighth child, a boy, named Paul James Blasco. Three more children would follow over the next few years.

For years, Andy Blasco worked in the mills of the Bethlehem Steel Corporation, while Mary kept the house and raised the kids. Home life centered on family, and grandparents living across the street along with extended Slovak family members and neighbors.

Paul and his ten siblings spoke Slovak despite their parent’s insistence on speaking English like every other American. The glue holding the neighborhood together, besides language and culture, was the Sacred Heart Roman Catholic Church, where the family attended Sunday mass and the parish school which all the little Blascos walked to every day.

Paul was eight in October 1929 when Wall Street crashed, ushering in the Great Depression and forcing millions of Americans like Andy out of work. Pennsylvania’s industries experienced devastating layoffs with unemployment figures reaching nearly 40 percent by 1933.

That same month in Moscow, Willy and Elena Lebedeva, his wife of two years, greeted Evelyn, their first and only child. Now a junior officer in the Russian secret police known as the NKVD with two years of radio training behind him and a young family for cover, Fisher began preparing for his first undercover mission. Posing as a wealthy British businessman, he set out in 1931 for a three-year tour to Stockholm.

In 1937, as a newly-promoted lieutenant, Willy Fisher was made the head of a radio training school for intelligence officers, operating undercover in foreign countries. His  personal world changed, as well, with the assignment of Rudolf Ivanovich Abel to Fisher’s school.

Three years older than his boss, Abel was born in Riga, Latvia to a chimney sweep and his wife. After dropping out of school at the age of fourteen and three years of drifting, he became embroiled in Red politics after joining the Russian Navy. In the years to come, his training as a radio operator led to a foreign posting at Moscow’s embassy in Shanghai.

Fisher and Abel soon became inseparable, sharing visits and meals together, exchanging intimate details about their past, and building a friendship that would continue to the end of their lives.

Stalin’s brutal purges in the 1930s did not spare the two friends. First to go was Abel. His only crime — guilt by family association. As an original Communist Party member and Lenin loyalist, Abel’s brother, Waldemar, had made a two-decade climb up the party apparatus ladder to the rank of political commissar — a prestigious position overseeing the ideological orthodoxy of thousands of Russians working in the Baltic shipyards. Waldemar’s arrest without warning in December 1937 on charges of conspiring against Stalin was followed by conviction, execution and disappearance in a mass grave near Leningrad along with 216 others.

Fisher’s turn came a year later. For the next three years, he existed in a surreal world — a non-person, shunned by everyone, with no job, no income, a family to feed and a constant dread of arrest and disappearance.

If Willy Fisher had his Abel, then Paul Blasco had Gene A. Fuhrman. From their first meeting as freshmen at Harrisburg Catholic High School (CHS), they formed a friendship that would continue for the remainder of their lives. In 1947, Gene joined the FBI as an Agent and his two sons would later become FBI Agents as well. . . . (read  the rest)